2021/03/22
Composting is an important part of the organic fertilizer production line. Let's talk about the factors that can affect the composting effect in detail. 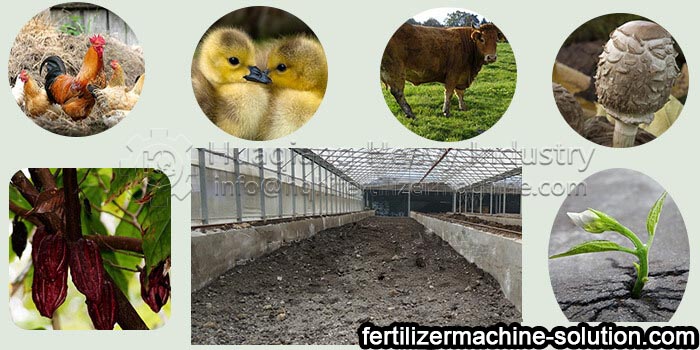 ② Water content: the water content of raw materials is generally maintained at about 55%, the water content is too large, and the material gap contains oxygen
It can not meet the demand of microorganism for oxygen; too small water content leads to poor fluidity of soluble organic matter, which prevents the supply of nutrients to microorganism. In the initial stage of fermentation, the water content can be adjusted by "filling dry substrate" combined with "material reflux after fermentation", in which "material reflux after fermentation" method also brings back a large number of biological enzymes, which is helpful for warming fermentation. If the moisture content of the material is too high, a grating plate should be set on the ground of the initial storage yard for solid-liquid separation. The leakage liquid can be used as water supplement in the middle and later stages of fermentation, and can also be used for liquid fertilizer production.

③ C / N ratio: in the composting process, microorganisms generally absorb 1 gram of nitrogen for every 25 grams of organic carbon consumed. Therefore, the C / N ratio is generally controlled at about 25. If the C / N ratio is too high, the organic matter is difficult to maintain after the temperature rises, the decomposition speed is slow, and the fermentation cycle is long. Low C / N ratio, slow temperature rise and excessive nitrogen release in the form of ammonia not only give off bad smell, but also cause nutrient loss. Therefore, C / N is not suitable and needs to be adjusted.